Clinical practice is always going to be underpinned by models, paradigms or frameworks. Life is underpinned by such approaches, so there is no reason to assume that clinical practice isn’t as well, despite what we might believe of the role of evidence based practice. For example, in politics there has always been and always will be the left/liberal approach compared to the right/conservative approach. Models, paradigms or frameworks are really coloured lenses that we view the world through. A scientific fact may be, for example, the unemployment rate (if we accept the shortcomings of how it is actually measured). That fact will be interpreted by a left wing liberal as something bad that needs something done about it, whereas a right wing conservative probably sees it as nothing more than the markets working efficiently. So it is with clinical practice, we all have lenses that which we view the same thing through. Members of different health professions will look at the same thing differently because of the models, paradigms or frameworks that they are viewing it from. This may be as wide as the traditional ‘medical’ model vs the ‘psychosocial’ model vs the attempt to integrate them as the ‘biopsychosocial’ model.

Science shows that you and I might think that some models, paradigms or frameworks of some professions or individuals are misguided (for example, the germ theory denialists; the subluxation model of chiropractic; the water memory of homeopathy), but they are used by different professions or individuals in those professions to underpin their approach to clinical practice.
Podiatry is no different in having different approaches to practice based on different models, paradigms or frameworks. This is never more evident than what it is in the application of biomechanics in clinical practice and its application to foot orthotic prescription. We now have a substantial body of scientific research on foot function and biomechanics and what foot orthotics do to the foot, but we also have a substantial group of models, paradigms or frameworks that can be used to interpret or view this research. 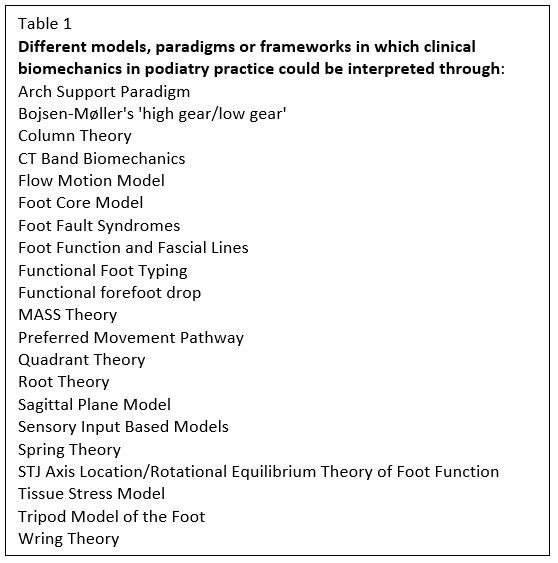 A lot has been written and talked about these different models, paradigms or frameworks over the years and I have done my fair share of that. My approach has been to try and immerse myself in each one to try and see where it is coming from and how they explain research results, clinical findings and how they would prescribe different interventions and the rationale that they would use for that intervention. I have tried to see what they have in common (and perhaps if something is common with a lot of them, then that might be important) and to see where they differ (and perhaps those differences might point to a need for specific research projects to resolve that).

For example, when it comes to commonalities, the concept of using a foot orthotic to dorsiflex the calcaneus (as opposed to invert it) for a pronated foot is common to several of the approaches, though they may use different terminology to describe that. Maybe because it is common, it might just be an important concept (it also might not be as well). This could point to the potential for some research to investigate interventions to dorsiflex the calcaneus versus invert the calcaneus. Whatever the outcome of that research, it would still be interpreted through the lens of the different approaches. An obvious example of how the different approaches might be used to interpret different research outcomes is how a study of functional hallux limitus (assuming that it actually exists) might be viewed. Under traditional Root based theory a functional hallux limitus is secondary to what is going on proximally in the foot whereas under the Sagittal Plane model, functional hallux limitus is primary and is the cause of what is going on proximally.

At some point this has to move beyond simple academic wankery (ie an academic playing with himself) and be made useful for clinical practice. The challenge then has to be one of distilling it all down into something that is clinically useful. Models, paradigms or frameworks are fine, but they are even better if they can inform clinical practice to make better decisions. The best one for clinical practice is the one that has the most explanatory powers, the one that is most consistent with all the available evidence and the one that has the most practical applications. I very much doubt that it is possible for research to show that one model is better than another. That is not the purpose of a model, paradigm or framework. Their purpose is in there explanatory powers.

Some of the approaches listed in table one have good explanatory powers and are consistent with all or most of the evidence. Some of them are not consistent with all the evidence and some only can explain a small part of it. If they are consistent with the research, that does not prove the model, it just proves it explanatory powers. For example, Root Theory has served the profession well and continues to do so, but a number of aspects of it are not consistent with the research, but as a theoretical framework it still can explain a lot (and keep in mind that some of the so called anti-Root Theory research is not really anti-Root Theory research its actually anti-what some people have misinterpreted Root theory to be).

Another example of the explanatory powers and purpose of the models, paradigms or frameworks is Bojsen-Møller’s ‘high gear/low gear’ concept. This model perfectly explains what the research shows is the pathway of the centre of pressure as it moves through the foot. It explains why it initially has the lateral movement and later why it comes back medially. This information can be used in clinical practice to design an intervention. This is also a good illustration of how so many misinterpret the underpinning models, paradigms or frameworks and get it wrong. Bojsen-Møller’s ‘high gear/low gear’ concept might be used to explain why the centre of pressure has the path that it does. The path of the centre of pressure does not prove that Bojsen-Møller’s ‘high gear/low gear’ concept is right just because it can explain it and is consistent with the research evidence. There is plenty that this model cannot explain and plenty that it is not consistent with.

So which model, paradigm or framework has the most explanatory powers and has the most usefulness for clinical practice? In my personal opinion one of the models in Table One is more consistent with the widest body of scientific evidence and has significant explanatory powers to explain the evidence and what we see in clinical practice compared to all the others. This is not the place to get into all the reasoning behind that, and it can be done at another time and in another place, but I make no secret of being a big fan of the Tissue Stress Model. This is simply because it can explain so much more than all the others.

*The above was originally written for the College of Podiatry publication Podiatry Now, but I got shafted after putting off other deadlines to write it, only to be treated unprofessionally by them; so publishing it here.